Last night, I participated in a market research focus group for a job search engine by an advertising agency.  The facilitator began the introductions around the room by asking us this all-important question: “What is your dream job?” Of the eight people around me, it would appear I was the only one who had little interest in sports other than watching AFL and tennis.  Everyone seemed to have harboured some secret ambition to be a professional athlete of one kind or another – a ski instructor, professional cricketer, professional tennis player, triathlete.

My dream job? Television writer. Preferably for a Drama series.  I can be funny but not funny enough to churn out sitcoms like Bill Prady and Chuck Lorre (“The Big Bang Theory“, “Two and a Half Men“, “Dharma and Greg“) do.  Maybe the new category of “Dramedies” like Monk and my absolute fave, White Collar.  I can do a blend of serious, contemplative, dramatic scenes with smart-alec remarks to keep the tone light and witty at the same time…or at least I would like to think so.  But that’s just my own opinion and I have been known to tweet out “I AM AWESOME” to my friends on Twitter 😀

If you had asked me this same question about my dream job 30 years ago I might have said I wanted to be an actress.  As a child I was addicted to TV and imagined myself in every scene with the leading man.  It didn’t matter whether it was a kung-fu series or a modern soap opera or a comedy, I would always somehow imagine a character played by me where I would be the leading lady.  As an adult, I guess I am still addicted to TV, though playing the part of the leading lady would forever only live in my imagination.  So how does one overcome the sad reality that she has no talent whatsoever as an actress?

My mother had always said I should write for television.  It wasn’t necessarily that I had any proven ability or that I had studied screenwriting or anything like that.  It had probably more to do with the predictability of so many Hollywood movies/shows that I could generally tell you what was going to happen in the plot before you got there.  Or my crazy ability to remember ridiculous trivia about who had been in what.  Anyway, I had not done any creative writing for many years, not since it was a mandatory exercise in high school English classes (which was one of my majors) when, late last year, I was encouraged by friends to try my hand at writing fan-fiction.  So rather than pretending I was an actress playing the leading lady to my favourite leading man/men, it was simply easier for me to create my own character based on myself and insert her into my favourite TV show! BAZINGA!

I was reluctant for a while to do so because it seemed hypocritical to say I didn’t want to read fan-fiction by others yet write one myself.  My reason was always that I did not want other people’s perceptions of the show itself, or the characters to interfere with how the real writers wanted us to see them.  Plus there were a lot of scenarios out there that seemed so far-fetched that I figured it would really annoy me to see them written badly and ruin the show for me.  However, when a couple of Twitter friends of mine began their own journeys into fanfic-land, I decided to read their stories in support of their efforts.  Even now, they are the only ones I will read (I don’t trawl through the net for new stories).

My first attempt at writing fanfiction for the White Collar fandom was exciting.  I had a great start because the idea I had for the character I wanted to create had been sitting in my head for a couple of months before I started writing.  So the story just seemed to pour out of me.  I would start writing late at night and write till 2 or 3am.  I would take my laptop into bed with me and just type madly away.  When it was finally done just before Christmas last year, I published it on a popular fanfiction website and all my friends loved it.  Now, when I read it back, I feel like there was so much lacking in content but it was not a bad first attempt.

My second attempt took longer to complete. Technically it took about two weeks to write but the writer’s block, coupled with pure laziness, meant nothing was written until I gave myself a deadline to get me going.  In the end, I felt it was a reasonably good effort.  The best compliment I felt I could get was when my readers told me they felt like they were watching a real episode and when they were getting it confused whether it was actually part of the show or part of my imagination.

Over the last few weeks, with time to spare and the White Collar Season 3 premiere looming, I knew I owed it to myself to make an effort to write the next sequel.  This time, I decided to be more disciplined and I had writing marathons for a week where I would write eight hours a day.  At times, scenes would just pour onto the page.  Other times, I would struggle to form the right words or find the right connection between the characters.  Once again, I knew what I wanted as the outcome but I had no idea how to make the connections.  Finally, I resorted to good old-fashioned pen and paper and did this: 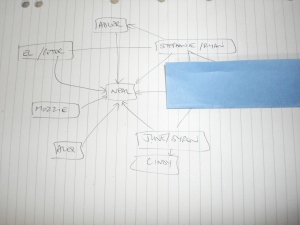 The Character Tree - the blue paper is my version of redaction for those who have not read my latest story yet. No spoilers!

It was my most epic effort ever. I felt so ambitious. In my last two attempts, my stories were only focused on following the major story arc that had been created on the real show but this time I wanted a crime to solve interspersed with the arc, just like the real show.  My inspiration came from a couple of images I had in my head as to what undercover identities I wanted our protagonist to dress up as (in this case, a priest) so I built up a ridiculous storyline and dialogue around how I wanted people’s reactions to be when they saw the most gorgeous looking man dressed as a priest.  When it was all done and dusted, my little effort came to around 23,000 words and 55 pages.  I was proud as punch.

Then the real test came when my hard work was published on the site and reviews started coming in.  For the most part, my readers loved it, and once again, the best compliment was when people told me they felt like they were watching the real show.  There were a couple of reviews that were not quite so glowing.  I was determined not to let negative reviews get to me.  After all, everyone was entitled to their opinion.  But when the first review came in after I published my final chapter, one that I was particularly proud of, that single sentence review cut right through me like a knife.  It was a sentence that completely questioned my entire story. I found myself suddenly terribly upset and it completely ruined all the excitement I had felt around releasing the last chapter and revealing the answer to the big mystery that had been built up all through the previous 20,000 words.

I suddenly felt like I was definitely not cut out for working in any creative industry. I told my friends I was hanging up my quills and would never write again.  Of course, it was a stupid over-reaction.  My cheer squad came through for me once again and reminded me that you can never please everyone and that sometimes people just feel the need to put down your work to make themselves feel superior.  It is the same advice I had given to others but quickly forgotten when it came to my own work.

So having tortuously slaved over my marathon writing effort, I am now trying to work through other ideas that popped into my head as a result of my last effort.  People have suggested I try to create my own original story.  I don’t know…it sure sounded great but so far, I have not been able to think of anything.  But ideas and inspiration come in many forms and I hope that one day soon, a new idea will pop into my head that will be original and interesting and I just might become a TV writer after all.  If that were to happen and I became famous, you can all say “Oh I knew her when…!” 🙂 In the meantime, you are all welcome to read my latest White Collar fanfiction titled “A Priestly Sum“.

5 thoughts on “The Secret Life of a Wannabe Writer”