Before you run away screaming, don’t worry, I have not signed up for any reality TV shows, nor do I have any interest in watching it in general (see “Why I Don’t Watch Game Shows and Reality TV“).  However, there are times when you just happen to be in the right place at the right time, and suddenly you find yourself inadvertently become a blur in the background of a hit TV show.  And when that happens, well, who am I to complain?

L: My friends and I in Ho Chi Minh City when Amazing Race Australia was being filmed (Nov 2010); R: My cousin and I in Brighton when Ramsay's Kitchen Nightmares was filmed (July 2007)

As far as I am aware, I have appeared on television three times.  On two of those occasions I was on holidays just minding my own business when it happened (see above pictures) and the third was at an Andre Rieu concert in Sydney in 2009 – apparently I could be clearly seen on the concert DVD because I have had several friends txt me to say they saw me in the audience although I have not seen it for myself.

Now when I say my 15 seconds of fame, I mean I was literally on-screen for that much time and if I hadn’t known what was happening, I would never have even spotted myself. 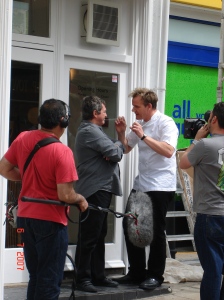 My first encounter with “fame” happened on the last day of my month-long trip to Italy an England with my cousin, Frances, back in 2007.  We had been in Brighton for a couple of days, getting tired of the constant rain and howling winds on the water (Brighton is a popular sea-side holiday destination for the Brits).  We had pretty much lost all interest in doing any more sight-seeing and were just passing time after lunch before driving back to Heathrow to return home.  So we wandered around the shops for some last-minute shopping when we came upon a small film crew.  We had just walked past them when I suggested to Frances that we go back and find out what was happening.  She was walking slightly ahead of me at this stage and it did not take long before she turned around, grabbed my arm, and said excitedly “It’s Gordon Ramsay!”  Sure enough, within seconds, the man himself came out from the restaurant we had just passed and stood on the footpath arguing with the owner.  It turned out he was filming Ramsay’s Kitchen Nightmares.  We loitered for a short while, observing the scene from across the narrow two-lane street with great amusement.  We had not even realised we were in a background shot until that episode aired in Australia about eight months later.  Within minutes of that episode airing, I was sent the above picture of the scene where I was spotted by one of my friends.

The second holiday TV encounter was during my trip to Vietnam last November.  My friends and I had only been in Ho Chi Minh City for two days, sight-seeing and generally trying to avoid getting run over by the crazy drivers when we heard tyres screeching to a halt near us as we stopped in front of the Opera House.  This would have not come as too much of a surprise (believe me, Italian drivers have nothing on the Vietnamese drivers – I have seen both!) if not for the rush of people scurrying out of the taxi before the car had even come to a complete stop.  Before we knew what was happening, we saw a cameraman and a sound guy followed immediately by two women get out of the taxi.  It turned out they were contestants for the first series of Amazing Race Australia.

The contestants ran around the square we were at.  We were not exactly sure what the challenge was but it was greatly amusing watching them run around crazily as the sound guy and cameraman try to keep up especially as they ran across roads.  We hung around for about half an hour as more teams arrived.  As the action was fast and furious, we had not expected we would be seen on-screen at all.  When the episode aired here last month, we carefully watched the scenes in slow motion.  The only reason I spotted where we were on-screen was because I knew where we had been standing during the action.

So now that I have experienced being on national/international television, I am happy with my 15 seconds of fame.  I don’t need to have a camera shoved in my face 24×7, thank you very much.  I am more than happy to be famous just amongst my little group of Twitter friends where I exist as the court jester with my random tweets, mostly about my favourite show White Collar, its stars and writers, and my happy/frustrated/angry tweets from a Sydney Swans AFL game every week depending on how the boys are performing.  And if you would like to join my “fan club” you can follow me and my crazy random adventures on twitter (look for @valshopaholic). 🙂

5 thoughts on “My Fifteen Seconds of Fame”

Join 1,232 other subscribers
Follow LibraGirl Rules – My Life, My Rules on WordPress.com