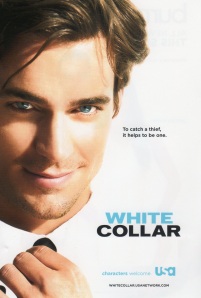 I’ve always been a strong believer in the idea of always learning.  Life gets pretty boring if you don’t learn something new everyday, or at least every week.   As of  time of writing, there have been 34 episodes of my favourite TV show White Collar that have aired so I suppose this post could have been “34+ things I learnt from White Collar” but I figured ten is as good a start as any just to pique your interest.

For those of you reading this who have somehow managed to miss the show, I’d like to invite you to come out from whatever nuclear bunker you had been hiding in for the past two years and check out this fun show.  It’s a show that makes me laugh, cry, swoon, laugh some more, and occasionally makes me think too much as I analyse every word uttered and every move made by the hottest cast (with their clothes on) on television.

So let’s start this list, and where better to start than the show’s pilot episode.

The FBI is trying to catch a bond forger nicknamed “The Dutchman” (so named because of his ability to disappear every time the G-men get close to catching him).  When they finally worked out where The Dutchman is hiding and printing his forgeries, they were stumped by lack of evidence to obtain a warrant to enter the warehouse where the crime was being committed. So our favourite criminal consultant, Neal Caffrey, put his electronic monitoring anklet to good use, entered the warehouse (which was outside his restricted zone), thus resulting in an army of FBI agents to descend upon the warehouse to catch him.  Where it gets good is this also falls under the legal definition of “exigent circumstance” and as explained by the very capable FBI Agent Diana Barrigan, “exigent circumstance allows us to pursue a suspect on to private property without obtaining a warrant”.  Senior Agent Peter Burke further adds “and to seize any and all evidence that has been discovered in plain view regardless of the connection to the original crime.” Bazinga! Bad guys caught with their hands in the cookie jar!

Our charming criminal consultant has a very particular style – think Frank Sinatra and Dean Martin: tailored suit and fedora.  But just looking cool isn’t enough for our resident hottie.  He has to be able to add a signature move – enter the hat flip. Check out a short example.

We can’t all be the Artful Dodger but if you want to know how pick-pockets grab your wallet out of your pocket without your knowing, the tip is to use your index and middle fingers like tweezers.  Never use your thumb – it bumps against “the mark” and you’ll get caught.

Disclaimer: I’m not advocating you try this out for real so please don’t blame me!

4.  How to spot a card cheat…or avoid being hustled

Ever come across street card hustlers with three playing cards on the table, they very quickly shuffle them around and get you to guess where the Queen is?  According to convicted white collar criminal and now technical consultant on the TV show, Simon Lovell, you can cheat by hiding a card in your palm and doing a quick switch.  Watch this video provided by show creator Jeff Eastin and try it yourself.

If you have ever stayed in a hotel or motel room, you will have no doubt noticed some kind of painting or print on the walls.  They’re supposed to brighten up the room and to make it look more “homely”.  Whether they serve their purpose or not, they are seldom worth stealing (besides, there’s probably no room in your suitcases by the time you’ve stocked up on the little bottles of shampoos, conditioners, soaps, shower gels, and body lotions).  There is, apparently, a trend for budding artists to add their special marks on the walls behind these boring paintings with something more interesting.  Ever since I learnt of this I have been looking behind every painting on hotel room walls.  I haven’t personally found anything yet but if you have, feel free to leave a comment and let me know where!

What happens when a filthy rich guy with a sense of adventure dies, leaving behind two conflicting Wills to his feuding heirs?  Why, you get a puzzle to solve with a treasure hunt to go on, of course!  Put together the front page of both versions of the Wills, hold it up to the light and voila! A compass rose! But hey, that’s not all! Grab a sextant and some mirrors, head to a sundial in Central Park , work out the next step of the puzzle is to go to the Planetarium to look at the first published book by a long-dead astronomer, only to have it crumble to “shrinky-dinks” before you could say “shrinky-dink” and blame it all on the dog.

But I won’t tell you how it all ends if you haven’t already watched this episode.  Rather, I’d like to share with you some facts about the astronomer, as tweeted by show creator, Jeff Eastin:

(1) His first published work was a letter to his twin brother who died at birth.

(3) Brahe’s nose was sliced off in a drunken duel, after which he wore a prosthetic nose made of silver.

(5)  He also had a pet elk that he used to feed beer. It died in a drunken fall down the stairs.

7.  Running a prisoner’s dilemma on the bad guys

Who knows what game theory is?  Hmm…probably a few of you, right? So we have an FBI agent who is on the run for allegedly selling witness information to the bad guys and is now wanted by the US Marshals.  It turns out the lead Marshal investigating the case is the guilty one and to catch him, the FBI runs a prisoner’s dilemma scenario on the bad guys – separate the two alleged guilty dudes and see who’s going to flip on the other one.  Granted the scenario didn’t really follow the rules of prisoner’s dilemma theory but it at least got everyone googling the definition.  So where’s the harm in that, right? 🙂

8.  You can split paper – beware of paper cuts before attempting this

We all know tissue paper comes in many varieties depending on size and ply, right?  Did you ever notice there’s also a difference in the quality of the paper that you write/print on as well?  I have to admit, I did know this but I did not know that you could actually split writing paper as well, or rather, I had never given it any thought at all.  But now that I know, if I ever need to steal a secret document, say, a secret internal memo talking about recalling a bad batch of new drugs distributed by a major  pharmaceutical company, all I need is to steal the back piece (leaving the original front piece in the bad guy’s filing cabinet), sprinkle some fingerprint dusting powder over it and all will be revealed!  If you don’t believe me, check out this video from Jeff Eastin 🙂

9.  How to test if your Franklin bottle is authentic

How do you outcon a fellow con when you are being conned the whole time about the con? (Got that?) When your nemesis, Matthew Keller, comes back into your life and challenges you to try and auction off a bottle of wine allegedly given to Benjamin Franklin by Marie Antoinette during his term as the US Ambassador to France (1778-1785) and you want to arrest him for trying to sell a fake, you need to prove that his bottle is a fake.  So you make your own bottle and challenge the auction house to run a series of tests to prove the authenticity of both bottles.  The most crucial test, apparently, is the “cesium test”.  Here’s how Neal Caffrey explained it:

“It’s a way to determine the age of the wine in the bottle without opening it. Cesium 137 doesn’t exist in nature.  After they detonated the first atomic bomb, it spread around the world. Anything that was bottled before 1945 is cesium free. If Keller’s bottle has it, it’s a fake.”

I won’t reveal the result of the test but the good guys won in the end.

To impress a girl, Neal Caffrey conned his way into a hotel room of some rich guy while he wasn’t there, then ordered $1000 hamburgers.  If you think that is outrageous, you are probably right.  Whilst Neal didn’t reveal what type of burger he had ordered, we do know that the Kobe beef and Maine lobster burger from where else but a place called Le Burger Brasserie in Las Vegas cost $777 (OK so Neal rounded up a little but who would notice when you’re looking into his blue eyes as he tells the story with such fondness?).

So there you have it.  It’s a short list amongst many more that could have been included such as how to break into a bank vault or something as simple as forging a signature.  But I think you get the idea.  I’m still turning up for my weekly White Collar class and I think you should too.  If you live in the US, you can catch it on the USA Network, Tuesday nights at 9/8C.

8 thoughts on “Ten Things I Learnt From White Collar”