I love a sunburnt country,
A land of sweeping plains,
Of ragged mountain ranges,
Of droughts and flooding rains.
I love her far horizons,
I love her jewel-sea,
Her beauty and her terror –
The wide brown land for me!

Australia: the land of kangaroos, koalas and deadly spiders.  Back in 1904, just three years after the federation of Australia, poet Dorothea Mackellar wrote what became an iconic poem entitled “My Country” to describe her love for her home.  I’m a far cry from being a poet and am definitely not qualified to criticise such a legend, but I think there’s a little something missing from Mackellar’s tribute:  Aussie Rules and Aussie meat pies.

OK, we can forgive her for not mentioning the pies…according to Wikipedia (don’t we all get our facts from there?) the Aussie meat pie originated in the early 1900s, so maybe Mackellar had not had the privilege of trying one when she wrote her poem.  But Aussie Rules football has been around since the 1840s!

For anyone reading this who follows me on Twitter, I apologise for my regular weekend tweet-spamming whenever I’m watching the Sydney Swans play.  I’m not a sports fanatic.  Growing up, the only sport I ever played or watched was tennis.  I thought football, in all its forms, was dumb – a bunch of grown men running around tackling each other and getting into scrums.  What was that all about?  Don’t even get me started on what some call “real” football – soccer.  What’s the point of getting excited over a match that could end in a draw and be decided by extra time or penalty shoot-outs?

But then I was converted – not to every code of football – but to Aussie Rules football.  Yes, yes, please hold off on all your complaints until after you have heard me out.

The year was 1999.  I was on a family holiday with my parents, my sister and brother-in-law on the north coast of Sydney.  My brother-in-law had brought along his Sherrin (the brand of football maker that is synonymous with Aussie Rules) on the trip and he wanted to have a kick.  Now, I can’t kick.  That’s all there is to it.  I’ve tried but somehow there seems to always be “chewy on my boots” (something you say to the opposition as they prepare to kick a goal against you).  Anyway, my brother-in-law took the ball and ran around the park with it, giving it a bounce every few metres as the rules required.  I wasn’t easily impressed.  Then he told me to try.  I took the ball, ran, bounced the ball, and…oops! What the heck?  It bounced backwards as I was still moving forwards!

From that moment on, I was converted.  Not long after that, I went to my first footy game at the Sydney Cricket Ground (SCG).  The Swans were up against the Brisbane Lions that day…and we lost.  Not exactly a very nice introduction to the game for me but still, I liked it enough to suggest going to another one.  As it turned out, it was to be Tony “Plugger” Lockett’s final home game (Lockett holds the record for the most career goals of 1360 and was the Swans’ star recruit in the mid-’90s) so we were lucky that we had got tickets before his retirement announcement because that day, the SCG was a packed house.  We beat the Adelaide Crows that day. 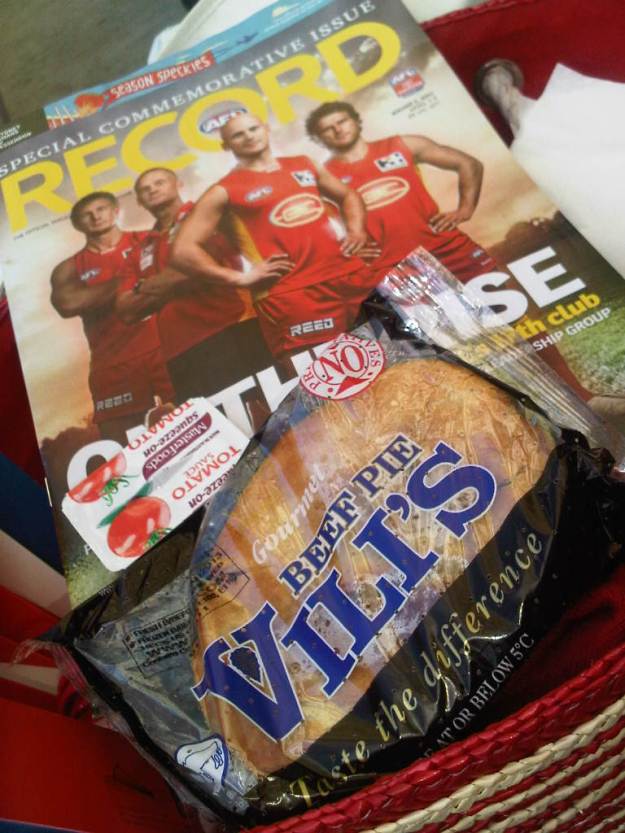 After that, I did not attend another football game until a few years ago – and finally I decided to become a fully fledged Sydney Swans supporter, becoming a season ticket-holder for the last few years.  I’m there in my red and white Swans gear at every home game, cheering them on, singing the Club song as loudly as I can when the boys enter the grounds, and then hoping that I will get to sing it again at the end when they win.  Some weeks, there is no denying, are harder to watch than others.  I’ve come to call the Swans “the cardiac boys” because they give me a heart attack with how close they come to losing (and in some cases, winning).  But they always give me a reason to come back and to have faith that they will give their best.  Oh and of course, there’s the obligatory meat pie at the footy – can’t really have one without the other, can you?

In 2009, after a tumultuous year at the Club, the Swans failed to play in the finals series for the first time since 2002.  Since then, a number of the Club’s most respected players, as well as former player and coach, retired.  The punters figured the Club would be in the “rebuilding” phase for a few years before they would make the finals again but ah-ha! They were wrong!  The Swans returned to fine form in 2010 and despite an up-and-down 2011 season, the future of the most respected footy club in Australia is looking sparkly bright!  They have proven that with great leadership, determination and strong coherence, even the underdogs can win.  And tonight, I will be cheering on the mighty Swans once again as they attempt to break their Melbourne Cricket Ground (MCG) hoodoo in the 2011 semi-finals.  Cheer! Cheer the Red and the White!

And before I leave you, I have one very important question: who has the best recipe for an Aussie meat pie?