For those of you who have been following me on Twitter, you will have noticed my recent excitement over a visit to everyone’s favourite Swedish furniture store. Yes, I am talking about IKEA, home of flat-packed, D.I.Y., stress-tested furniture.  I love the idea of being able to put furniture together myself like this.  It makes me feel like I am building something which, for a person who can’t even be bothered sewing up a loose button on a shirt, is a huge deal.  Some of you may well argue whether the furniture-maker should be stress-testing the effects installation of their products might have on their customers as well.

If you are an IKEA fan like me, you will know that their instruction manuals don’t have any text at all. This is a great idea as it overcomes any language barriers that are commonly found in products made in non-English-speaking countries with badly translated instructions such as “insert screw in round hole behind floor” or “hook nail with driver in proper hammer”. Huh?  (Ok, so I may have made those two up, but you get the idea.)

When I recently brought up the topic of building my new IKEA desk with colleagues, this brought up a new debate that went something like this:

“Oh, I hate it when you get to the end and you find there’s a piece missing from the box!”

“No, no! What’s worse is if you find at the end there’s an extra piece and you don’t know where it’s supposed to go!”

I’m proud to say neither scenario has happened to me.  Why?  For starters, I read the manual. Yes, it’s that simple.  Well, there’s more. I take out all the pieces and match them against the diagrams that say what pieces should be in the boxes, although you might be in big trouble if you ignored the warnings at the checkout that your purchase comes in multiple packages and suddenly find yourself a box short!

Then there’s the trick with the humongous bag of assorted nails, screws and thingymijigs (this is a technical term).  Don’t fret!  I found the perfect solution! I happened to have a couple of dishes for dipping sauces that were perfect for this purpose! I simply matched the tiny screws, etc, to the part numbers in the manual, labelled them with some little Post-It sticky notes, put them in the dish, and voila! Bob’s your uncle (he really is mine)!

A few hours later, you get this: 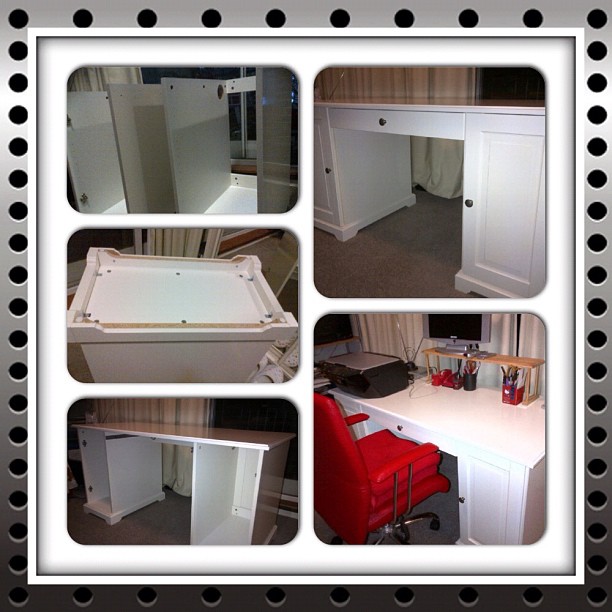 Now, you might be questioning why I am sitting here at my newly built desk promoting a furniture store.  I lay the blame squarely on the skinny shoulders of a close friend of mine, Tarina, who lives in Charleston, South Carolina, where her nearest IKEA store is a three-hour drive away. She bemoans the fact that she cannot get IKEA’s Swedish meatballs where she is (they serve them in the IKEA cafe or, according to Tarina, you can also buy the frozen version from their food hall in the Sydney store).  And so, after perhaps half an hour of discussion on Swedish meatballs and how my previous trip to the store with my sister lasted nearly four hours because she wanted to sit in every chair and on every couch to test them out (resulting in me having dreams of being trapped in some strange but neatly furnished house in Sweden – I swear I am not making this part up!), Tarina suggested I blog about this.  In exchange, she may be agree to be a guest writer on this blog, to share her story about life in Charleston – so far removed from where she grew up in Sydney.

So my dear readers, if you could leave a comment here to help me convince her to write something, that would be much appreciated!

In the meantime, let me get back to admiring my new Billy bookcase while I sit in my Poang chair and watch my TV that is perched upon my new Besta Burs bench.

3 thoughts on “Oh For The Love Of All Things IKEA!”