Another year has gone by and at this time of year, “Top 10” lists abound.  Well, I do not profess to be a professional television critic, and so my lists are purely reflective of the shows that I have watched and loved over the 2012 season.  In TV land, many new shows make it to air each year, but sadly many don’t survive.  But for those shows that have and continue to be regular staples in our homes, we welcome you and look forward to many more seasons of goodness.

And so, here are some of my favorites for 2012. If you are interested in reading through some of my past TV reviews, you can find all the links to them on this site under “TV Reviews“. 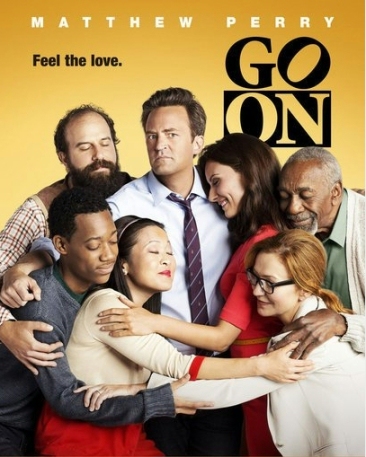 Matthew Perry was always my favorite “friend” on the sitcom that made him famous and in the years since, he has made it clear he can master drama as well as comedy (remember his appearances in The West Wing and, more recently, The Good Wife?). Now Perry is back in the comedy world (does anyone remember Mr. Sunshine? Anyone?), playing radio sportscaster, Ryan King, who joins a community therapy group after the sudden death of his wife.  The premise may be a little predictable – from Ryan’s original dismissal of group therapy as being ridiculous and full of crazy people to his growing fondness of those crazy people – but who doesn’t need a little bit of cray-cray in their lives to make them feel more “normal”?  As with any story involving a death, I have to confess, the show brings the occasional tear to my eye as Ryan moves from denial to grief. The supporting cast is funny and quirky without being annoying, which makes a whole world of difference when it comes to whether a comedy works or not.  I, for one, am glad that NBC have decided that the show will, indeed, go on.

As an avid fan of The West Wing, I was excited by the return of Aaron Sorkin to the small screen (after his award-winning effort on the big screen with The Social Network in 2011).  Sorkin spent a couple of years researching life behind the making of news programs. With the trademark Sorkinesque rapid-fire dialog, we are introduced to Will McAvoy (Jeff Daniels), a respected TV anchor and editor of News Night as he suffers a very public breakdown.  The Newsroom uses real-life news events of the past year as a backdrop to the stories covered on air by Will and his team, led by former flame, Mackenzie McHale (Emily Mortimer) as his producer and Charlie Skinner (Sam Waterston) as his boss.  Throughout the season, we have seen Will face death threats, get high and confront politicians as election time neared.  The supporting cast is well deserving of every award just for being able to keep up with Sorkin’s dialog, with a special shout-out to Olivia Munn who shows off her Japanese language skills brilliantly.  It is exactly the dose of intelligent news reporting television audiences have been waiting for.

In my mind, Amy Sherman-Palladino is like the female equivalent of Aaron Sorkin – except her writing is focused on small-town families and not large-scale political statements. But the witty, rapid-fire dialogs both are famous for means Bunheads is an easy winner for me.  I loved Sherman’s Gilmore Girls, and although you can’t help but be, at times, slightly confused by the similarities between the two shows, including the fact that Sutton Foster and Julia Goldani Telles are spitting images of Lauren Graham and Alexis Bledel from GG, you will quickly fall in love with this small town of Paradise, California. Michelle (Foster), a former Vegas showgirl, marries a well-meaning admirer – Hubbel (Alan Ruck) – one drunken night after being rejected at yet another audition.  She follows him home to Paradise and is introduced to his mother, Fanny (Kelly Bishop – a GG alum) who not only lives with him but runs the local dance academy.  The cast of quirky locals is a joy to watch and there are a lot of young talents showcased in Bunheads.  The freshman season continues with its premiere on January 7.

I confess that the only knowledge I have on any comic book hero comes from the movies and tv shows made based on those characters (I may have seen The Avengers a couple of times at the theater and the Blu-ray at least once).  The latest comic book hero to make it to the small screen is Oliver Queen (Stephen Amell), aka, Green Arrow, though this incarnation of the hooded hero is simply known as Arrow.  Every superhero has a back-story to explain how he came to be who he is, and Ollie’s is no different.  As the billionaire playboy son of Robert Queen (Jamey Sheridan), Oliver had everything including a girlfriend who had no idea he was cheating on her with her own sister.  While on a yachting trip with his father, they encounter a storm that only he survives.  For five years, the Queen family and the rest of the world believed Robert and Oliver had both perished in the storm but then suddenly, a Chinese fishing boat finds Ollie stranded on a Chinese island and returns him to his mansion.  Ollie returns a changed man – not only does he now know how to hunt with a bow and some DIY arrows, but he is also now conversant in Chinese and Russian!  But that is not all – he is back with a vengeance to right the wrongs that his father admitted to committing just before killing himself to save Ollie. Whatever you may think of the weekly revenge stories on offer, my favorite moments come from the pop culture references that Ollie just doesn’t get, having been away from gossip mags and reality TV for five years (shouldn’t we all be so lucky?).  Oh, and have I mentioned that Ollie likes to train shirtless? Hmm…here’s to my new favorite twitter hashtag: #shirtlesstrainingftw.

I was a latecomer to Justified – yes, how dare I?  But I have atoned for my sins by catching up on the first two seasons real quick, in time for season 3.  Based on legendary American author Elmore Leonard’s short story “Fire in the Hole”, it is safe to say that the TV series (with Leonard as a consulting producer) far exceeds expectations.  With Leonard’s trademark wit and cowboy cool, actors Timothy Olyphant and Walton Goggins bring to life the story of two old friends/foes – Raylan Givens, a Deputy US Marshal, and Boyd Crowder, an unforgiving, yet loyal felon who’s got his hands dirty in more piles of bad stuff than you can count.  Every episode is abundant with classic lines. One of my favorite S3 episodes is “Thick As Mud” in which one of the crooks, Dewey Crowe, is so adorably dumb that he believes his kidneys have been stolen (like in the classic urban legend) and attempts a string of armed robberies to get the money to buy them back.  Joking aside, one of the saddest moments of the series comes in the season finale, when Raylan explains to his ex-wife who is pregnant with his child, that his father had shot and killed a state trooper because he thought the man was Raylan.  Season 3 also introduced us to another fantastic villain in the guise of Robert Quarles (Neal McDonough) who was literally “disarmed” in an epic scene that will not be soon forgotten.  I can’t wait for season 4, set to kick off on January 8!

With all that has happened in the lives of Walter White (Bryan Cranston) and Jesse Pinkman (Aaron Paul), it’s hard to believe that only a year has passed by since the former high school chemistry teacher-turned-drug-lord was diagnosed with terminal cancer on his fiftieth birthday.  In its fifth and final season, Breaking Bad sees Walter celebrate his fifty-first birthday as the new drug kingpin of New Mexico, having successfully ensured former employer/nemesis Gus Fring (Giancarlo Esposito) met an explosive end at the end of season 4.  Throughout this entire journey Walter has taken us on, we have seen how he has transformed from being a family man whose only motive for cooking meth was to earn money to provide for his family, to one entirely obsessed with his new job because he has nothing left to live for.  As if eluding the DEA is not a tough enough job for any criminal, Walter’s brother-in-law, Hank (Dean Norris), is a DEA agent and gets promoted to head his own taskforce to take down Fring’s (and now White’s) cartel.  Each time Hank gets close to discovering the identity of “Heisenberg”, Walter has managed to get away, but in the mid-season cliffhanger, Hank may have finally cracked the code that could bring it all crashing down on Walter.  Season 5 continues in the summer of 2013.

The big question in everyone’s minds at the end of Homeland’s freshman year when CIA Analyst, Carrie Mathison (Claire Danes), underwent electroshock therapy to treat her bipolar disorder was whether she would still remember all that she knew about Nicholas Brody (Damian Lewis).  Several months have passed and Carrie has resigned from the CIA in an attempt to recuperate from her illness and live a “normal” life.  The CIA is still behind the eight-ball with Saul Berensen (the wonderful Mandy Patinkin) continuing the hunt for terrorist Abu Nazir (Navid Negahban) but getting closer.  Brody is now a US Congressman and in the running as running mate for VP Walden’s (Jamey Sheridan) presidential campaign.  But Brody cannot keep his secret forever and Carrie is finally vindicated when her suspicions are proven to be correct.  In an award-worthy scene that lasts around 16 minutes in the episode “Q&A”, Brody finally confides in Carrie when he pours his heart out, confessing to (almost) everything.  There are endless twists and turns and although some have suggested that the season ender could have been even more impactful had Brody been eliminated, I believe the writers have set up season 3 rather nicely.

A TV highlights report from me would not be complete without a mention of my obsession with all-things White Collar.  At the end of season 3, we saw TV’s hottest conman, Neal Caffrey (Matt Bomer) do a runner with his partner-in-crime, Mozzie (Willie Garson).  Having given Neal the green light to flee, FBI Agent Peter Burke (Tim DeKay) finds himself going after his friend again when another agent with a reputation for hunting down fugitives (dead or alive) is brought in to catch Neal.  When Neal is eventually brought back to New York, our dynamic duo returns to a life forever-changed: Neal reveals the truth about his childhood – his father, James Bennett (yes, Neal’s real last name is revealed!) had been a corrupt cop and he grew up in WITSEC with his mother and Ellen, who had been his father’s partner.   Unfortunately, before Ellen could tell Neal the whole truth about his father, she is murdered, telling him to “trust Sam”.  Amongst her belongings, Neal finds a video tape she made for him almost two decades ago, telling him that she has hidden evidence that could prove James’ innocence.  As Neal and Mozzie, and eventually Peter, find Sam and try to find Ellen’s killer, we are kept wondering just how much we know about the secretive Sam and whether he is who he says he is…until the mid-season cliffhanger when, through DNA evidence, it turns out that Sam is (drumroll) James!  But is he really?  Well, I have had the privilege of watching the winter premiere already but I won’t spoil it for the rest of you.  Tune in on January 22nd to find out!