For three years during his stint as a writer on USA Network’s White Collar, writer Matt Negrete made me laugh and he made me cry. Then he left that writers room and moved to another popular show, AMC’s The Walking Dead.  I had never watched the show before, despite critical acclaim, I was determined that “zombie” shows were not my cup of tea. Full credit to my friend, Tarina, for repeatedly telling me that it is soooooo much more than a zombie show. With the announcement that Matt and Channing Powell (another former writer on White Collar) were both heading to the Walking Dead writers room, it offered me the perfect excuse to check out this show, now halfway through its fourth season, and I have not looked back since.

In the spring of 2013, I was fortunate enough to travel to Los Angeles and meet almost the entire White Collar writers room. For those of you who have been following me on Twitter (@valshopaholic) or this blog, you will know just how big a fan of the show I am. Unfortunately, Matt was knee-deep writing his first episode of The Walking Dead (check out Season 4, episode 4 “Indifference”) so I did not get to meet him in person but he was kind enough to answer a few questions recently in between working on new episodes for Season 5.

1. When did you start writing and who or what inspired you to start?

I was never a math or science guy in school but I really enjoyed English and art. And growing up I was really into TV and movies so when it came time to pick a major in college I thought “why not major in film?” At USC, where I went to college, they offered two undergraduate film degrees: film writing and film production. My original impulse was to learn how to direct, but then I figured the foundation to a good TV show or movie isn’t the directing (which is still important), but the script. And since I’d always really dug studying English and language, it just made sense to major in writing.

2. What was the first writing job you had (paid or unpaid)?
My very first paid writing gig was a freelance script for Louie Anderson’s animated Saturday morning series called “Life With Louie.” At the time, I was working as an assistant in the finance department at CBS (which makes so much sense since I hate math, right?), so I had to pull about a week of all-nighters to get the script done. I’ve had coffee coursing through my veins ever since.

3. What was the moment when you realized you were a “real” writer (e.g. first paycheck, winning a contest, etc.)?
I didn’t really feel like a “real” writer until I was staffed on my first series, an animated Disney show called “Pepper Ann.” Even then, it took me a while for it to sink in. I remember getting my first weekly paycheck and thinking at any moment Disney would realize I was just some kid off the street and fire me.

4. As you know, I am an obsessive fan of the show White Collar. How did you come to be on the writing staff in season two?
Jeff Eastin (creator and showrunner of White Collar) was looking to hire a few new writers for season two and I had written an original script about secret assassins that he dug. The script had been optioned by the USA Network (which also airs White Collar), so we knew a lot of the same executives. Also, I was eager to make the transition from animation to hourlong live-action and I was totally up for taking a lower title and pay cut to make that happen. Since a lot of entry-level staff writers don’t have tons of writing experience, I think that gave me an edge.

5. You have a list of writing credits on animated TV shows, as you mentioned earlier, such as Life with Louie and Making Fiends. Then you wrote for White Collar and now you’re with The Walking Dead as a Co-Producer and writer. Does your writing process change depending on the kind or genre of show you write for?
I think my personal writing process is always the same: sit down, freak out because I’m staring at a blank page, and then just fill it with words and then revise, revise, revise until I’m happy with it. But every show runner approaches story slightly differently. Sometimes, on White Collar, Jeff would come in with an idea for a cool/funny/interesting scene and we’d build a story around that. On The Walking Dead, Scott Gimple (showrunner on TWD) looks at the big picture of a character’s emotional journey and the specifics get filled in later.

6. I have seen many photos and videos over the last few years posted by the White Collar writers and I watched 30 Rock (which gives me the impression that writers are all a little cuckoo, in the best sense of the word!). How do you all get any work done when there seems to be so much fun and mayhem all the time?
I think we HAVE to make room for some fun or else we’ll all go a little cuckoo. 98% of what we do is hard work with tight deadlines so you have to make the best of that 2%. That’s especially true on The Walking Dead, which has very little onscreen humor. In between takes of episode 404, Chad Coleman (who plays Tyreese) and I wrote song together called “Your Teeth Are Too White to be a Zombie,” about a zombie extra who didn’t have her false rotten teeth in. Chad still sings it to me every time I see him.

7. When I started blogging a few years ago and asked the twitterverse for advice on what I should write, there was unanimous response that I should write stuff I know. When you are writing for a TV show, whether it be about a con-man or a group of survivors in a zombie apocalypse, how do you build characters that make your viewers relate to their circumstances?
Well, one of the first paid scripts I ever wrote was about a twelve-year-old girl buying her first bra. Obviously, I was never a twelve-year-old girl, and contrary to what some may suspect, I’ve never purchased a brassiere. But we’ve all had that experience of going through something embarrassing, being sensitive about how we look, so I just tapped into that universal experience. And it never hurts to do a little internet research, too.

For all the Walking Dead fans out there *SPOILER ALERT for anyone who has not watched season 4 yet*. Which was the tougher decision in the writers room: to leave Carol behind or to kill Hershel?
Definitely Hershel. Scott Gimple and the rest of us never take killing anybody lightly. The cast and crew are like a family and Scott Wilson (who plays Hershel) is the nicest man you’ll ever meet. That said, killing him, as difficult as it was, felt right for the story we’re telling this season. As for banishing Carol, that was hard too… but it didn’t feel as definitive and final as killing Hershel. There’s no bringing Hershel back to life (especially after seeing how he died), but if someone disappears into the distance, there’s always the possibility we’ll see them again at some point down the road. 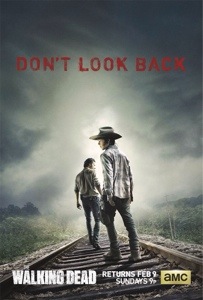 And just like that, time ran out for my little Q&A. Now I am curious to hear the song by Chad and Matt! And Matt’s script about the 12-year old girl buying her first bra! Maybe one day, I can convince him to share these?

Don’t forget, The Walking Dead season 4 continues on February 9.  Check it out!