It seems like a lifetime ago now that I was obsessed with a little show on the USA Network called White Collar, starring the ever hard-working Tim DeKay and a little-known Texan named Matt Bomer. Well, it has now been about eighteen months since we bade au revoir (which, incidentally, is the title of the series finale) to the show that inspired me to write fiction for the first time since high school, and also helped me make friends around the world through the power of Twitter. In the years since the show premiered, I have met many of these friends in person, and most of the writers from the show as well.

Over the course of the show’s six seasons, I, along with thousands of dedicated and loyal fans, followed the cast and writers on Twitter and looked forward to behind-the-scenes photos of the hardworking team goof around in between takes. Oh, how I have missed those! 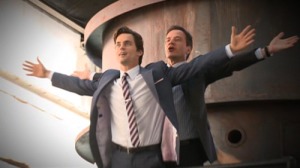 My visit to New York in April 2013 was planned around the season 5 production schedule to allow me to visit the cast on location, however, a production shift meant I missed out on meeting the cast in person but the writers were kind enough to meet me for a drink in Los Angeles. Despite that disappointment, I was ecstatic when I was given the opportunity to participate in a press call with Matt and Tim (for the second time!) on behalf of LenaLamoray.com ahead of the Season 5 premiere. You can read the full report here but below is an excerpt from my Q&A with Agent Peter Burke and Neal Caffrey about Season 5.

It was October 11, 2013, which also happened to be Matt’s 36th birthday, so of course I started the call with a hearty birthday wish from Australia.

Valerie Leung (VL): You’re very welcome. I had many tweets from your fans asking me to make sure to say happy birthday to you so you are very much loved around the world.

MB: Wow, please tell them all I said thank you.

VL: OK, first question: Is Peter going to regret bringing in Agent Siegel (Warren Kole’s character) as Neal’s new handler just as I’m sure he regretted bringing in Kramer in the past to investigate the U-boat treasure?

Tim DeKay (TDK): I don’t think we’ll regret it at all…if anything it would have been nice to have seen more of Warren and certainly Agent David Siegel. I think, just as it would have been great to see that stretch out more of Peter in prison, it would have also been fun to have stretched out Siegel. This is not a comment on the writing. I completely understand why they do the things they have to do, but it’s more of a comment on how much Warren brought to the role, the whole dynamic between Peter, Neal and David Siegel.

MB: I love working with Warren. He brought a lot to the role and made a lot out of the role. I had a great time with him. 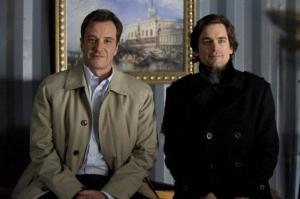 VL: I’m going to use a Breaking Bad analogy. I feel like Neal is a bit like Walter White – he does bad things, he breaks the law but we still want Neal to win and we still back him. But it gets to a point where he’s hurt enough people, especially the people who love him, and you just want him to pay the price, and I don’t mean having people he loves pay the price. Why should the audience still keep cheering for him? Why should Peter still believe that Neal can be redeemed?

MB: You have to look at the motivation for the behavior. If you look at Neal’s intentions from the beginning of this whole series, even when he’s stolen things in the past, he always says it’s never about the money, it’s more about the game. Certainly in the framework of this season, everything he does that plays around that grey area is motivated out of love and best intentions. The execution that makes that happen is where he gets into trouble. But at the end of the day, his motives are somewhat pure. And if I were Peter, I would have kicked the shit out of him, to be honest with you. But I do think that if we pulled that mutual respect and appreciation, the show would really lose a big part of its central relationship. And a credit to Tim, as far out as the writers would have Neal go to execute things, over the course of the years, he has done a great job in grounding the show. Peter is really the root of the show. He is the one who is our solid ground. Tim and the writers have found a great way for Peter to still have a great respect for and value Neal in spite of all the grief he’s caused.

TDK: I think there have been times when Peter would like to beat the shit out of Neal. But Peter also knows Neal is coming from the right place. He sees that the guy is not crazy and he certainly doesn’t want to ever physically harm anybody, but sometimes jeopardizes other people’s lives and maybe doesn’t quite think that through. But that’s the thing…it’s like Tom and Jerry…he really wants to get the mouse but…if Peter was really just trying to get Neal and get him back to prison and realize he shouldn’t have hired this guy and brought him out…it’s been done. That’s not nearly as interesting as this constant tug of war.

MB (with a chuckle): It all goes back to Tom and Jerry.

TDK: Yeah it does…always back to Tom and Jerry…with a little bit of Abbott and Costello mixed in there.

MB: Sure…and a pinch of Simon and Simon.

Well, those dynamic TV duos certainly brought back a lot of childhood memories for me, too.

Both Matt and Tim have moved on, as have the writers who have brought so much joy and inspiration to my creative life. And I will continue to treasure these memories. 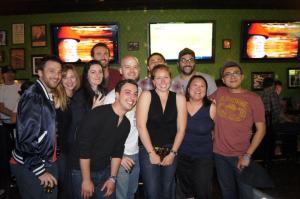 Me and the White Collar Writers in LA May 2013