On Monday, April 15th, 2013, a couple of brothers set off a bomb at the finish line of the Boston Marathon that killed three and wounded hundreds of others. Just as I remembered exactly where I was and what I was doing when the tragedy of 9/11 happened, I still remember clearly where I was when I heard the news of this latest tragedy.

I had been spending the day with two friends who had travelled from Atlanta, GA, to Charleston, SC, to meet me on my long-overdue return to the USA.  We’d spent the day at Drayton Hall, a former plantation that is now owned and managed by the National Trust for Historic Preservation. It had been a rainy day but an enjoyable one hanging out with friends.

When I got back “home” to where I had been staying with my university friend (and the reason for my visit to Charleston) in the early evening, she’d had the television on while preparing dinner. The coverage of the bombing was all over the news. First reactions always include: Who would do such a thing? Why? How many innocent lives have been lost or are injured? Where are those responsible? The manhunt commenced immediately, of course, and  security was heightened everywhere.

Back in August 1998, I spent three summery days in Boston, MA, during a trip to Canada visiting friends in Toronto. I had a “wicked” good time where I got to visit such famous landmarks as the Harvard campus, Beacon Hill and, of course, the Bull and Finch Bar, better known as “Cheers”, where everybody knows your name (for the record, the interior of the actual pub looks nothing like the place where Sam Malone served regulars like Cliff and Norm). 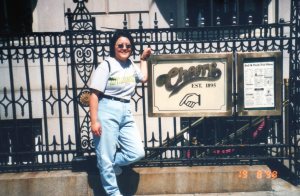 It was a town full of history as my friend, Boston-born-and-bred, showed off his hometown with an afternoon pub crawl (disguised as a walking tour). Along the way, we saw lots of “duck” tours – the amphibious vehicles popular among tourists as a way of seeing the town. My friend refused to go on one with me, embarrassed by the quacking that was a requirement for all participants. “I won’t stop you from going on one, but I would not be caught dead in one of those,” he said seriously. I never did do the Duck tour – maybe next time.

Getting back to 2013…I had originally planned to return to Boston on that trip but opted to spend more time in New York City instead. I flew out from Charleston to NYC the day after the bombing, a little concerned given the hunt for the bombers was still ongoing. I went to the airport to check in for my flight early in case there were any delays going through security as there had been fears that NYC could be the next target. Surprisingly, there were no delays and my flight arrived at JFK Airport on time with no troubles. However, after I arrived, I learnt that there had been a scare at La Guardia Airport – the other major airport hub getting into New York.

I spent two weeks in NYC. Everywhere I went, I noticed the additional police presence all over the city. My previous visit had been in 1995, when the biggest concerns the police had were of drugs and homicide, not terrorism. The most noticeable difference was at Times Square. I can’t even begin to estimate the number of people who visit that area each day, the majority of whom are visitors from all over the world, all carrying cameras and backpacks, any one of whom could be a potential terrorist. How do the police even begin to spot danger and suspicion under those situations? But the sight of heightened security did not make me feel scared that NYC could be a target. If anything, I felt safer right there than any other place I had visited.

In the middle of the Square, near the TKTS booth (where you can buy discounted tickets to Broadway shows), a couple of people were handing out free t-shirts, proclaiming “NEW YORK hearts BOSTON” (see above picture). Yes, the two cities have become bonded by shared experiences of being kicked where it hurt. The country united at a time of crisis. The manhunt continued in Boston – the media coverage was relentless and I found myself glued to the television, looking for answers. But in the end, it does not matter why or who. The most important thing is how the city rises up against adversity, to remember those who died, to support those who survived and to make sure the world never has to face this kind of tragedy again.

Boston – we heart you.

1 thought on “Boston, We Heart You”