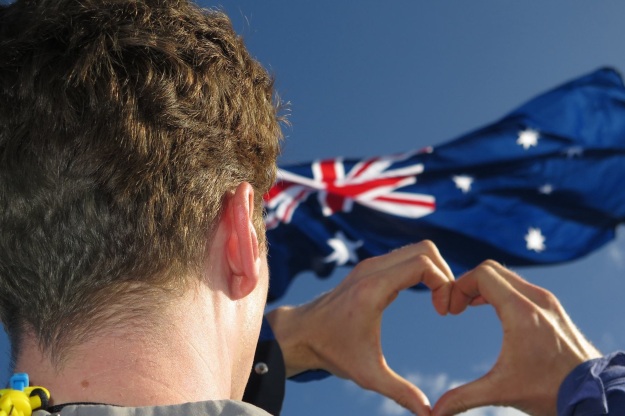 I often joke that, had Les Misérables been set in England and not in Revolutionary Paris, Jean Valjean would have been sent to serve out his prison sentence in sunny Sydney instead of the galleys in Digne. It is a well-known fact that the first European settlement of this British colony (then known as New Holland) consisted of English convicts. These days, British tourists (and other countries near and far) arrive in droves on a daily basis.

Australia Day is celebrated on January 26th to mark the landing of the First Fleet and the raising of the British flag in 1788. Despite past controversies over the treatment of the local Aboriginal people by the white settlers, this day is usually celebrated by the sights and sounds that Australia is famous for. As it is summertime, a “barbie” or a visit to the beach are common on this day.

For my family this year, however, we decided to do something a little different, not the least due to inclement weather that has lasted all day (nobody like soggy sausages). We decided to celebrate Australia’s cultural diversity, of which we are contributors of, being migrants ourselves, and went to my local Shanghai dumplings restaurant. We stuffed ourselves silly, just as we would have had I been doing the barbie, but with no clean-up afterwards. I tried to tell my 12 year-old nephew that dumplings are just like sausages – you never really know what’s inside. Then we came home and watched the Australian Open Tennis.

The world has witnessed much tragedy and too many acts of terrorism recently. Perhaps not any more than at any other times in history, but certainly with the modern technology that exposes us to them more than ever before, it is almost impossible to turn on the news without seeing something awful on our screens. But I always like to think that how we react and respond to those tragedies is what makes us who we are as a country and as Australians.

Just before Christmas 2014, Sydney became the centre of attention when a lone gunman stormed into a cafe in the heart of the Central Business District and took sixteen people hostage. The next morning, we awoke to the sad news that two of the hostages and the gunman had been killed when the police stormed through the doors. The outpouring of grief that followed continued for a week. It was overwhelming and filled with love and respect, a city united against acts of terrorism and violence. This is what makes me proud to call myself an Australian.

Martin Place, where the cafe was located, was covered by flowers as tributes to Sydney siege victims – Photo by abc.net.au

On a lighter note, I will leave you with a funny take on our national anthem, for Australians are known to be a bunch of larrikins. We can be serious but we don’t like to take ourselves too seriously. So here is one of our exports, comedian Adam Hills, singing Advance Australia Fair to the tune of Working Class Man. Enjoy and happy ‘Straya Day!

Join 1,232 other followers
Follow LibraGirl Rules – My Life, My Rules on WordPress.com